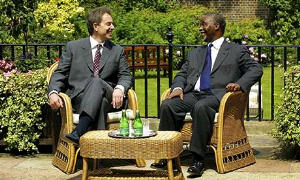 Tony Blair planned to invade Zimbabwe with South African support and oust Robert Mugabe after the country descended into chaos, it was claimed yesterday.

Former South African president Thabo Mbeki said Mr Blair asked for his help in 2000. But Mr Mbeki favoured a negotiated settlement and, despite pressure from Britain to join military action to depose Mr Mugabe and his Zanu-PF party, he refused.

During his presidency from 1999 until 2008 he said South Africa and Britain were in stark disagreement over how to handle Mugabe. He added: ‘The problem was, we were speaking from different positions.

‘There were other people saying, “There are political problems, economic problems – the best way to solve them is regime change. Mugabe must go”. This was the difference. ‘But we said, “Mugabe is part of the solution to this problem”.’

The South African government helped to broker a power-sharing agreement between Zanu-PF and the opposition Movement for Democratic Chang (MDC) in 2008. It later collapsed.

FORMER British Prime Minister Tony Blair leaned on South Africa to back a plot for a military invasion of Zimbabwe and topple President Mugabe from power, former President Thabo Mbeki has revealed.Click here for the Full Story

Story from the Zambian Watchdog

President Robert Mugabe may be able to extend  his 33-year-old rule over Zimbabwe for another ten years after signing a new  constitution today. Click here for the Full Story

Story from the Zambian Eye

ZAMBIA has told Zimbabwe that it is in no hurry to be paid for 150,000 tonnes of maize it is sending to its southern neighbour, President Robert Mugabe said on Thursday. Click here for the Full Story

President Robert Mugabe has described Prime Minister Morgan Tsvangirai as a flip-flopper who takes advice from too many women. Click here for the Full Story

President of Zimbabwe Robert Mugabe is expected in Zambia today to officiate at the 86th Agricultural and Commercial show which opened its gates to the public at 08: 00 hours.

Mr. Mugabe is expected to be accompanied by his wife Grace.  Click here for more on this story. story on Lusaka times website