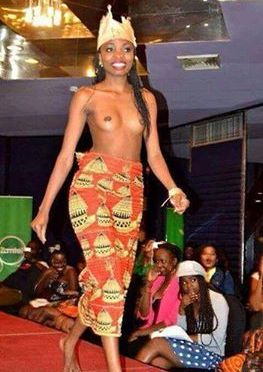 “People should not condemn Charity Mwanza without trying to understand the context in which she bared her chest. It was not in public but in an event where models showcased various Zambian traditional wear.

Whereas many people accept the baring on chests during the Nc’wala, they should not forget that Charity chose to showcase the nc’wala during the Miss Freedom pageant. She was in a role play.

“As organisers, we spoke to Charity about the act and she went ahead because she felt comfortable. Her family was in attendance and they approved. She feels proud of her culture and does not regret her act despite the condemnations coming from various sections of society.

She was aware that there would be journalists and photographers at the event but went ahead. It was from her own volition and we organisers do not entice the models or control what they choose to showcase.

Some came out as Lunda traditionalists, others in Lozi misisi, some as warriors etc. “Sponsors and the general public need to see the positive side of this.

They need to also see the courage it took Charity to do what she did. We should not be classic Zambians who just condemn without building. Charity did not do what she did to manipulate results; she didnt win anything.”

The search for Miss Freedom of the world Zambia envoy continues and
fifteen finalists were contesting the title last friday at the Pamodzi Hotel in Lusaka. Click here for the Full Story